Free of what you ask? Mobile gaming of course.

The implications given the title I used probably make it sound like I’m going to spend all of these  words doing nothing more than unnecessarily demonizing an innocent and by all measures prosperous industry. Probably true, at least for a lot of it. That isn’t to say that the whole of mobile gaming is rotten but there is a high percentage of casino-like predatory practices which are almost wholly divorced from the noble goal of putting out a quality product. It is not impossible to find classic gaming options on mobile devices where you pay a flat fee for an enclosed experience but a large number of otherwise promising games are locked behind monetization schemes that are little better than having a gun shoved in your ribs in exchange for entertainment. Obviously that example will have people shouting, “But NonWashable! No one is forcing you to play!” and they would be absolutely correct. The flaw I see there is that people want to play these games because they look, and sometimes are, really fun. Much like I did with the couple games which ate up the last couple years of my life I got in thinking, “I know I can pay but I’m just going to go the f2p (Free to play) route and grind out the good stuff. Ostensibly these games are designed so that you can play for free or pay to advance “faster”. The reason I put quotes around “faster” is that what it should really say is “at all”. The advancement is so torturously slow for people playing for free that it becomes clear the only way to truly play the game and participate at a moderate level is to open your wallet. For many people before they know it a line appears in their budget that is specifically for their chosen mobile game. After all, whats $20 a week, really?

The option to pay as many will tell you is for people who just don’t have time to dedicate to advancing without it, a way for on-the-go professionals to have their fun for a swipe of the credit card. It seems entirely reasonable when it’s presented to you and it’s obviously been successful enough as there is a litany of well known lingo within the mobile gaming industry to describe such people.

There are probably more detailed breakdowns out there available on the internet if you are curious but I’ll let you find those, the above is just to give you a general idea of where the money flows from. While the argument is not wholly without merit that the boosts offered by real cash investments are for people with more money than time, the ugly truth is that the business model of convenience is used as cover to make the games nearly unplayable for low playing or free players. Energy meters are also a popular way of regulating the amount of time you can play in a sitting and forcing players to use valuable in-game currency to continue and then money for more currency. You’ll hear it said that this is an intentional move by developers in order to make it so people don’t binge and burn themselves out on the game, artificially limiting their play time to short bursts. Perfect for where a mobile game should fit into your day. Seems like a legitimately altruistic move on the part of the development team up until a plethora of time limited events and exclusive rewards force you to dip into your game currency or wallet to acquire them. This isn’t even getting into what is required to be moderately competitive for the game’s best rewards, spending money is an absolute requirement. Effectively nickel and diming you for your entertainment, although in the cases of these games it’s usually $2, $5 and $10 dollaring you, up to purchases of $100 at a time. Naturally the more you purchase the bigger “bonus” you get for these virtual currencies. Why spend 5 when I can spend 10 and get a better deal? Then again why spend 10 when 20 is even better deal?

The most galling part of this for me as someone who loves games is that quite often they are well designed and outside of the predatory practices of the industry in which they are published they would probably be commercially successful. Even the games industry proper is having trouble shrugging off the overtly profitable fleecing practices of nickel and diming its customers but we at least have a history of precedence for fighting against it. The mobile gaming industry fell to this sort of business model so early and so quickly that their customers really have not known any other way. What is worse is that many of the studios who develop these games have bought into the accepted business model so much so that planned obsolescence is factored in from the get-go. They extract as much profit as they can from whatever community jumps into the game when it releases and then let it die or kill it intentionally at the end of it’s “life cycle”. What’s worse still is when the developers for these games are clearly passionate about the content and work tirelessly with the community in order to continually make the experience better only to have it overshadowed by the business decisions.

All of this is not to say that the economics of these games is not important as the revenue they generate is how they continue to function. We’ve seen over the years how the non-mobile gaming industry has had to expand its business to generate cash flow beyond the release of games. While these schemes have been met with varying amounts of success or failure there is a constant battle being fought between customers who demand a certain level of quality and studios who want to maximize the profitability of everything they create. There are certainly a plethora of examples to choose from but two that come easily to mind are Fallout 4 and Witcher 3. Taking a quick stroll through the games respective Steam pages paints a pretty vivid picture of what good management of an IP can do.

Fallout 4 while an overall decent game has had much of it’s DLC roundly denounced by its community for being overpriced and delivering too little, while also failing to address problems that were present in the original release. 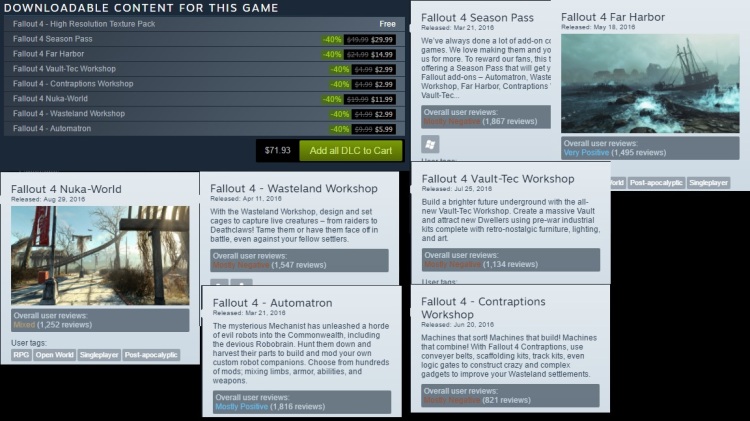 Witcher 3 on the other hand as seen below delivered, in addition to a quantity of free updates, DLC of such a high quality that the community couldn’t wait to spend their money on it. 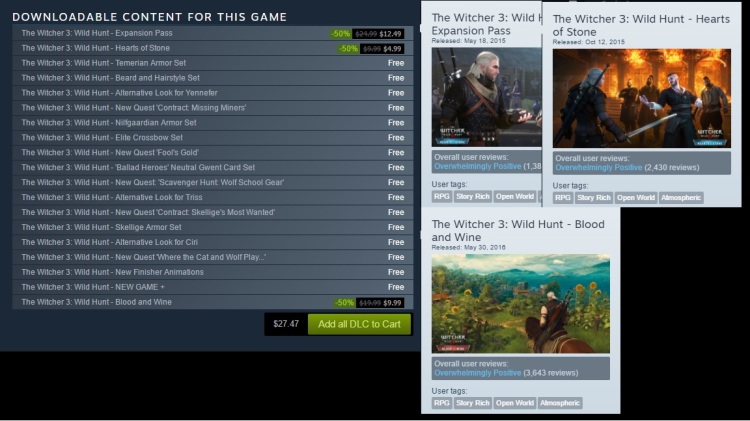 Ultimately whether you are dealing with mobile or traditional games there is no shortage of people who are looking for any reason to pay for them, sometimes before the quality of it is even known. A business model that is built upon anything but giving customers a product that is worthy of their money is nothing short of insanity. Traditional gaming has been fighting against the slide towards ubiquitous microtransactions and I expect that to continue while modern mobile gaming started there. I think it’s possible for that industry as a whole to pull back from it’s slot machine style schemes and in some limited ways we have seen it although its been largely from major studios re-releasing old games on todays more powerful devices. I can only hope that more of the larger mobile development studios see the value in focusing more on an experience people want to pay for as opposed to games which sucker people into feeling they should pay lest all of their time and investment up till now be wasted via the Sunk Cost Fallacy.

Mobile gaming is certainly not all doom and gloom but after spending a significant amount of my free time over the past couple of years invested in them I do not feel like my time with them was worth the cost, especially financially. The communities themselves were fantastic and keeping in contact with the folks I met has certainly been a joy but it is still overshadowed by the general feeling that we all regret what we invested in the game but not eachother. Not matter how we look at the experiences we had the positive feelings are generally in spite of the game that brought us there and not because of it. Given how much work goes into making and maintaining these games that is a failure in the worst possible way.

Hopefully you’ve enjoyed the read and I hope I’ve made some interesting points! Someday I might delve a little deeper into the games I played specifically or some other aspects of mobile vs traditional gaming but for now I think this sums up my feelings on it.

Have a great day!