Tyranny is, in short, a fantastic RPG set in a familiar fantasy world full of monsters, magic and bizarre but memorable characters.

The world of Terratus is in a bit of upheaval as Kyros the Overlord marches her armies south to the Tiers in a move to consolidate the last free realm into her empire. You are a Fatebinder of Kyros’ court that is overseen by Tunon the Archon of Justice. The character creation will be very familiar for anyone whose played an RPG  in the last ten or fifteen years. Character customization, origin, profession and skill-set and a myriad of accompanying menus will keep you occupied for as long as you wish to tinker. Tyranny proper begins with an optional Conquest Mode which provides you the opportunity to make choices that set the groundwork for the relationships that will evolve through the course of the game. Along the way it also provides you with some important context and information for the factions you’ll come in contact with during the game.

One of the great things they also do is provide hyperlinked text in every aspect of the game, even dialogue trees, that if you hover over you can see brief descriptions reminding you of what something is. Instead of having to consume dozens of long codex entries in an effort to memorize them just in case it’s important down the line this design ensures that the information is available to you without having to go and track it down. The assumption being that your character should be able to recall this information on demand even if you the player cannot.

Once you are finished making choices in Conquest Mode you are deposited on the front lines of Kyros’ war in the Tiers with orders to get the stalled advance moving again by delivering an Edict.

Kyros’ Edicts are a unique form of magic known only to the Overlord herself that are written and then delivered by the Fatebinders to their targets. Once the Edict has been read aloud as a sort of one sided contract the criterion must be met within the specified time or catastrophe will follow. The delivery of this Edict brings you into contact with the leaders of the armies responsible for bringing the Tiers to heel. Graven Ashe of the Disfavored, an elite army of highly disciplined iron-clad soldiers and the Voices of Nerat who commands the Scarlet Chorus, a horde of barely organized bloodthirsty criminals, outcasts and conscripts harvested from their conquests.

Tyranny wastes no time thrusting you into the role of judge, jury and executioner of the Tiers and Kyros’ occupying armies. In true CRPG fashion the game allows you nearly any path you like through the story be it riding roughshod over anyone or anything in your way or playing delicate shadow politics to manipulate your way through the story. I did a little of each during my play-through and found both to be compelling with unique advantages or repercussions. Another enjoyable piece of gameplay related to the in depth conversation and allegiance system is numerous combo skills granted to you for exploring those relationships. Be it fear or loyalty that you inspire in those around you they will eventually grant you powerful team abilities to unleash in combat. A great way to reward players no matter their play-style.

The magic system in Tyranny is also not to be ignored since it allows you a wide array of versatility for your spell-slingers and even physically focused warriors. Throughout your travels in the Tiers you will collect Accents and Sigils which you can mix and match with different kinds of magic to alter the spells vital stats. With each additional tweak it increases the necessary spell-power needed by the user to cast it meaning that at their base level most characters can wield a little utility magic while dedicated casters harness the sort of cataclysmic power that will land you in the town criers notes.

Visually Tyranny stands right beside its cousin Pillars of Eternity and many other isometric RPGs  with the strange and memorable destinations found all around the Tiers. 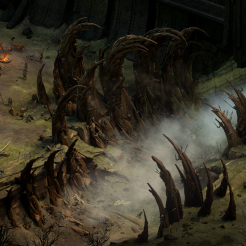 The soundtrack and voice acting were both very well done and although I would not mark them down in the history books as genre defining they are certainly noteworthy. Among it’s other virtues they have cemented Terratus as a world I would like to re-visit as often as I possibly can. For fans of this style RPG and even better, people new to the genre, Tyranny is a worthwhile addition to their library.